Great Lent - Main  I  Holy Week  I  Pascha to Pentecost 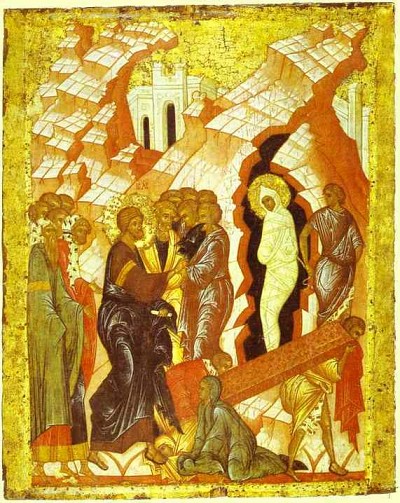 No Public Services - All Services Streamed on Facebook and Zoom

Looking Ahead to Palm Sunday and Holy Week

Scroll down for special articles on this powerful festal interlude, which announces in advance Christ's victory over death, and celebrates His Triumphal Entry into Jerusalem!

The Raising of Lazarus 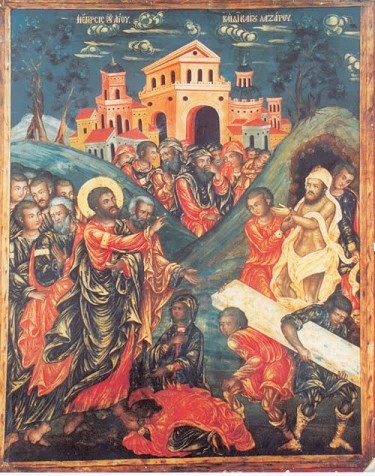 Saturday of the Raising of Lazarus

On Saturday of the Sixth Week, the Holy Church commemorates the miracle of raising Lazarus accomplished by the Savior six days before the Jewish Passover during which He suffered (John 11:45-57). The Holy Church glorifies the raising of Lazarus, as proof of the divine power of Jesus Christ and as evidence of the resurrection of Jesus Christ and in the general resurrection of all the dead, as is expressed in the Troparion of the feast. The faithful finding out the great value accomplished by the Lord remembered in today's miracle, the Holy Church hymns:
O Lord, your voice destroyed the kingdom of Hades and the word of Your authority raised from the grave the one who was dead four days, and Lazarus became once again the saving first fruits of the regeneration of the world. All things are possible to You, O Master and King of all.

But at the same time the Holy Church reminds also that the commemoration of this event has served as the beginning of the resolute revolt of the council of the priests and Pharisees against the Savior. Performed before the eyes of innumerable people, the great miracle of the resurrection of Lazarus turned many to the faith in Jesus Christ and caused the strongest indignation against Him by the high priests and elders of Judah, and the Sanhedrin now decided, upon the advice of Caiaphas to arrest Jesus only where it will be possible (John 11, 47-50). Thus the paradigm of the resurrection of Lazarus served as the direct reason for the condemnation of the Savior to death. Therefore since the very first century the Christian Divine Services were established to remember this great miracle before the Passion Week itself. In the Fourth century the general Church considered the resurrection of Lazarus a solemn feast as can be seen from the set of homilies for this day by St. John Chrysostom, the Blessed Augustine, and others. In the VII and VIII centuries the sacred church hymnographers: St. Andrew of Crete, St. Cosmas of Maium and St. John of Damascus have created special hymns and canons for this feast that are still sung to this day.
Source: MYSTAGOGY Blog
Read the Synaxarion Entry for the Raising of Lazarus


Apolytikion in the First Tone
O Christ our God, before Your Passion, You raised Lazarus from the dead to confirm the common Resurrection for all. Therefore, we carry the symbols of victory as did the youths, and we cry out to You, the victor over death, "Hosanna in the highest. Blessed is He who comes in the name of the Lord."

Kontakion in the Second Tone
Christ, everyone's joy, the truth, the light, life, the resurrection of the world, has by His goodness appeared to those on earth. He is the archetype of the resurrection, granting divine forgiveness to all.

The Entry into Jerusalem ~ Palm Sunday

On this day, the Sunday of Palms, we celebrate the radiant and glorious Feast of the Entry of our Lord Jesus Christ into Jerusalem.

Sitting on a foal, He Who stretched out the HeavenBy a word seeketh to loose mortals from irrationality.

Synaxarion
After Lazarus had been raised from the dead, many, on beholding this event, came to believe in Christ. And indeed, a resolution was passed by the Jewish synagogue that Christ, and Lazarus himself, should be killed. Jesus, therefore, departed, letting evil run its course, and the Jews meditated how they might kill Him on the Feast of Passover. Some time after His flight, six days before the Passover, Jesus came to Bethany, where Lazarus was who had been dead, and there, after a supper had been made, Lazarus ate with Him; his sister Mary poured out ointment on Christ’s feet. On the following day, He sent His Disciples to fetch the ass and the foal. He Who has Heaven for His throne entered Jerusalem, riding on the foal of an ass. The children of the Hebrews themselves spread their garments under Him and, cutting down palm branches, threw some of them in the way and carried others in their arms, and they cried out as they escorted Him: “Hosanna to the Son of David; blessed is He that cometh in the name of the Lord, the King of Israel.”This took place because the All-Holy Spirit moved their tongues to praise and laud Christ. Through the palms (the name given by the Hebrews to the tender branches) they signified Christ’s victory over death. For it was customary for the victors of athletic contests and wars to be honored and borne about with branches of evergreen trees. The foal signified us, the people of the Gentiles, sitting and resting on whom Christ is proclaimed victor, conqueror, and King of all the earth.About this Feast the Prophet Zacharias said: “Rejoice greatly, O daughter of Sion; for behold, thy King is coming to thee, meek and riding on an ass and the foal of an ass.” And again, about the children, David says: “Out of the mouths of babes and sucklings hast Thou perfected praise.” When Christ entered the city, the whole of Jerusalem quaked and, goaded on by the High Priests to defend it, the crowds sought to do away with Him. He eluded them by hiding, and when He did appear, He spoke to them through parables.By Thine ineffable compassion, O Christ our God, make us victors over irrational passions, and vouchsafe us to behold Thy clear victory over death, Thy radiant and life-bearing Resurrection, and have mercy on us. Amen.

The Spiritual Meaning of Palm Sunday

"No one in this world is happy unless he has opened wide the gates of his spiritual Jerusalem—his soul—and received God into himself."

On the Entry of the Lord into Jerusalem

One of the most miraculous details of our Savior’s life was foreseen by the Prophet Zacharias through the dark glass of time, and described thus:

Rejoice greatly, O daughter of Sion; proclaim it aloud, O daughter of Jerusalem; behold, the King is coming to thee, just, and a Saviour; he is meek and riding on an ass, and a young foal (Zach. 9:9).

The Apostle Luke, an eyewitness, describes this event:

And when he had thus spoken, he went before, ascending up to Jerusalem. And it came to pass, when he was come nigh to Bethphage and Bethany, at the mount called the mount of Olives, he sent two of his disciples, saying, Go ye into the village over against you; in the which at your entering ye shall find a colt tied, whereon yet never man sat: loose him, and bring him hither. And if any man ask you, Why do ye loose him? thus shall ye say unto him, Because the Lord hath need of him.

And they that were sent went their way, and found even as he had said unto them. And as they were loosing the colt, the owners thereof said unto them, Why loose ye the colt? And they said, The Lord hath need of him. And they brought him to Jesus: and they cast their garments upon the colt, and they set Jesus thereon. And as he went, they spread their clothes in the way. And when he was come nigh, even now at the descent of the mount of Olives, the whole multitude of the disciples began to rejoice and praise God with a loud voice for all the mighty works that they had seen; saying, Blessed be the King that cometh in the name of the Lord: peace in heaven, and glory in the highest.

And some of the Pharisees from among the multitude said unto him, Master, rebuke thy disciples. And he answered and said unto them, I tell you that, if these should hold their peace, the stones would immediately cry out. saying, If thou hadst known, even thou, at least in this thy day, the things which belong unto thy peace! but now they are hid from thine eyes. For the days shall come upon thee, that thine enemies shall cast a trench about thee, and compass thee round, and keep thee in on every side, and shall lay thee even with the ground, and thy children within thee; and they shall not leave in thee one stone upon another; because thou knewest not the time of thy visitation. And when he was come near, he beheld the city, and wept over it,

And he went into the temple, and began to cast out them that sold therein, and them that bought; saying unto them, It is written, My house is the house of prayer: but ye have made it a den of thieves. And he taught daily in the temple. But the chief priests and the scribes and the chief of the people sought to destroy him, and could not find what they might do: for all the people were very attentive to hear him (Lk. 19:28–48).

This is the description of an historical event that took place twenty centuries ago, as related by an eyewitness. But this event has more than historical significance; it also has a spiritual meaning, and therefore also a moral meaning for every modern-day Christian. According to the spiritual meaning, Jerusalem signifies the human soul, and the entry of the Lord into Jerusalem signifies the entrance of God into the soul.

The multitudes of people, crowded and pushing one against another, joyfully awaiting and greeting Christ, symbolize the noble sentiments and exalted thoughts of a person who joyfully greets God, his Savior and Deliverer. The leaders of the crowd of people, who hate Christ and want to kill Him, personify the lower desires and earthbound thoughts, which take the upper hand over man’s noble nature and oppress it. Now this lower human nature rebels against God’s entry into the soul, for when God is enthroned there, the lower nature will inevitably be destroyed.

The Temple in Jerusalem symbolizes the holy of holies of the human soul—that sacred place where the Holy Spirit has if only a miniscule haven even in the greatest sinner. But earthly passions penetrate there also, and lower human nature has used even it to achieve its base aims.

Christ heals the soul of those sick ones who fall down before Him with faith, and this means that certain impulses of the soul, although sick, thirst for unity with God and seek for Him, the only true Doctor in the world. Christ’s prophecy of Jerusalem’s destruction symbolizes the destruction of any soul that God rejects, lays low, and spews forth from Himself.

No one in this world is happy unless he has opened wide the gates of his spiritual Jerusalem—his soul—and received God into himself. A godless man feels lonely to despair. The society of others does not make his loneliness go away, but only increases it. However he who has taken God into his soul will never feel lonely even in a desert. No one dies an eternal death other than one in whom God has died.

Proceeding Through Holy Week
Visit our special Holy Week Resource Page
for a unique and inspiring collection of articles and videos, tracing the events of the Passion of our Lord, and outlining the deeper meanings behind each day of His Saving and Self-Emptying Sufferings for our salvation . . .