The Midfeast of Pentecost ~ The Living Water of the New Creation 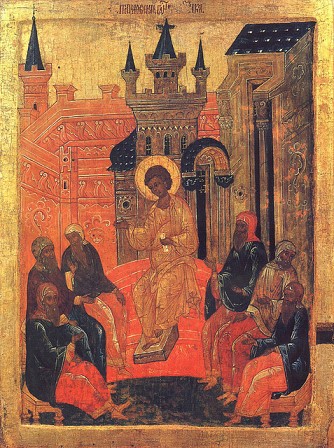 Today's celebration is the midpoint of the fifty days between the Feasts of Pascha and Pentecost.

St John tells us (John 7:14) that "in the midst of the feast Jesus went up into the Temple, and taught." The Feast in question is the Feast of Tabernacles (celebrated in September), not Pentecost.

The Church has appointed John 7:14-30 to be read for the Midfeast, thereby linking Pascha and Pentecost. In Chapter 8 of St John's Gospel, the Lord came to the Temple again and taught the people who came to Him. After leaving the Temple, he encounters the man born blind. We will hear about him on the Sunday of the Blind Man.

The Troparion of the Midfeast ("In the middle of the Feast, O Savior, fill my thirsting soul with the waters of godliness, as Thou didst cry to all: If anyone thirst, let him come to Me and drink [John 7:37]. O Christ God, Fountain of our life, glory to Thee!") hints at the encounter of Christ and the Samaritan Woman in just a few days.

Read Fr. Steven's classic meditation on the Midfeast of Pentecost, 'To Glisten with Splendor'. 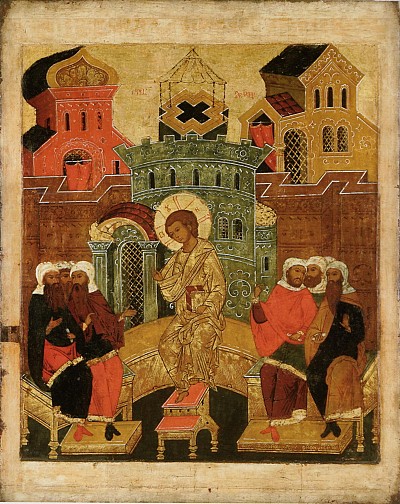 In the middle of the Feast, O Savior,
Fill my thirsting soul with the waters of godliness, as You did cry to all:
If anyone thirst let him come to me and drink!
O Christ God, Fountain of our life, glory to You!

Christ God, the Creator and Master of all
Cried to all in the midst of the Feast of the law:
Come and draw the water of immortality!
We fall before You and faithfully cry:
Grant us Your bounties, for You are the Fountain of our life!

The Uniting of Pascha and Pentecost 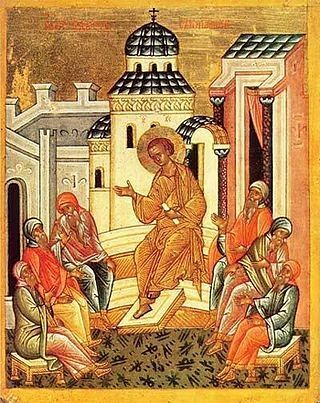 The fifty days following Pascha until the Feast of Pentecost are known as the period of the Pentecostarion in the Orthodox Church.

At the mid-point between these great feasts of Pascha and Pentecost, on the twenty-fifth day which is always a Wedneday, is one of the most beloved feasts for the most devout Orthodox Christians known quit simply as Mid-Pentecost. Mid-Pentecost is to the Pentecostarion what the Third Sunday of Great Lent which honors the Holy Cross is to the period of Great Lent. It is a day which helps us focus on the central theme of the entire period. Whereas the mid-point of Great Lent reminds us to bear up the Cross of Christ bravely so that we may daily die with Christ in order to experience the Resurrection of our Lord, so also the mid-point of the Pentecostarion enlightens us regarding the theme of the fifty days following Pascha - which is the acquisition of the Holy Spirit poured out as a gift upon all the faithful who partake of the living water which is Christ Himself.

The central theme woven throughout the period of the Pentecostarion therefore is water. This becomes the central theme of the period because it is the central theme of the Gospel of John which we read in its entirety during the Pentecostarion and which naturally flows into the Acts of the Apostles which is also read during this period in its entirety. This theme appears for the first time on Pascha itself in the joyous Canon of the Feast of Feasts written by Saint John the Damascene when he invites us to "drink a new drink," not "brought forth from a barren rock," as in the Old Testament under Moses, but which rather "springeth forth from the grave of Christ." Then during the Paschal Divine Liturgy the priest processes with the Gospel and chants loudly from Psalm 67:27 saying: "In the congregations bless ye God, the Lord from the well-springs of Israel."

When Renewal or Bright Week is over the Church wisely sets up two Sundays in which to abolish all doubts concerning the Resurrection of Christ, that of the Sunday of Saint Thomas and the Sunday of the Myrrh-bearing Women. This is done in order to ensure that we all partake of the living water that only the risen Lord can give. The following three Sundays, as we approach Pentecost, the theme of water becomes more and more central in the hymns of the Church. Thus we are found one Sunday at the Sheep's Pool with the Paralytic, then at the Well of Jacob with the Samaritan Woman, and finally at the Pool of Siloam with the Blind Man. During this festive period we hear concerning the "living water" which if one partakes of "he will never thirst". We are taught that it is our Savior Himself who is this living water, and we partake of Him through the baptismal waters and the Cup of Life which issued forth from His side at His crucifixion unto remission of sins and life everlasting. Then on Pentecost we have grace rained upon our parched souls and bodies so that we may be fruitful and have a great harvest as we hear from the holy Gospel on that day: "If any man thirst, let him come unto Me and drink". Finally the Pentecostarion concludes with the Feast of All Saints, that is those who partook of the "waters of piety", which is the harvest of the outpouring of the Holy Spirit.

The Fathers teach us that the feast of Mid-Pentecost stands in the middle of the fifty-day period from Pascha to Pentecost as a mighty flowing river of divine grace which have these two great feasts as its source. Pascha and Pentecost are united in Mid-Pentecost. Without Pascha there is no Pentecost and without Pentecost there is no purpose to Pascha.

We read the following entry in The Great Horologion that further explains the details of the feast:

"After the Saviour had miraculously healed the paralytic, the Jews, especially the Pharisees and Scribes, were moved to envy and persecuted Him, and sought to slay Him, using the excuse that He did not keep the Sabbath, since He worked miracles on that day. Jesus then departed to Galilee. About the middle of the Feast of Tabernacles, He went up again to the Temple and taught. The Jews, marveling at the wisdom of His words, said, 'how knoweth this man letters, having never learned?' But Christ first reproached their unbelief and lawlessness, then proved to them by the Law that they sought to slay Him unjustly, supposedly as a despiser of the Law, since He had healed the paralytic on the Sabbath.

"Therefore, since the things spoken of by Christ in the middle of the Feast of the Tabernacles are related to the Sunday of the Paralytic that is just passed, and since we have already reached the midpoint of the fifty days between Pascha and Pentecost, the Church has appointed this present feast as a bond between the two great Feasts, thereby uniting, as it were, the two into one, and partaking of the grace of them both. Therefore today’s feast is called Mid‐Pentecost, and the Gospel Reading, 'At Mid‐feast'—though it refers to the Feast of the Tabernacles—is used.

"It should be noted that there were three great Jewish feasts: the Passover, the Pentecost, and the Feast of Tabernacles. Passover was celebrated on the 15th of Nissan, the first month of the Jewish calendar, which roughly coincides with our March. This feast commemorated that day on which the Hebrews were commanded to eat the lamb in the evening and anoint the doors of its houses with its blood. Then, having escaped bondage and death at the hands of the Egyptians, they passed through the Red Sea to come to the Promised Land. It is called 'the feast of Unleavened Bread,' because they ate unleavened bread for seven days. Pentecost was celebrated fifty days after Passover, first of all, because the Hebrew tribes had reached Mount Sinai after leaving Egypt, and there received the Law from God; secondly, it was celebrated to commemorate their entry into the Promised Land, where also they ate bread, after having been fed with manna forty years in the desert. Therefore, on this day they offered to God a sacrifice of bread prepared with new wheat. Finally, they also celebrated the Feast of Tabernacles from the 15th to the 22nd of 'the seventh month,' which corresponds roughly to our September. During this time, they lived in booths made of branches in commemoration of the forty years they spent in the desert, living in tabernacles, that is, in tents (Ex. 12:10‐20; Lev. 23 LXX). "
The Feast of Mid-Pentecost is celebrated for an entire week until the following Wednesday, making it an eight day feast. During this entire time the hymns of Mid-Pentecost are joined with that of Pascha. Because of the theme of water, traditionally the Church celebrates the Lesser Blessing of the Waters on this day, preferably with a procession with the Holy Cross to a water spring.

The theme of the feast not only invokes water, but even more central to the Gospel chronology it honors Christ as Teacher and Wisdom as He reveals Himself between the stories of the Paralytic and that of the Blind Man. During this time we are told: "Now about the middle of the feast Jesus went up into the temple, and taught...Jesus answered them, and said, 'My doctrine is not mine, but his that sent me. If any man will do his will, he shall know of the doctrine, whether it be of God, or whether I speak of myself'" (John 7:14-30). The icon for this feast depicts the young Jesus teaching the elders in the Temple (Luke 2:46, 47) at which time Jesus first revealed Himself as a teacher or rabbi. Traditional Orthodox icons will depict Jesus as larger than the elders, showing his superior spiritual status.

Since the hymns of the Church invoke and praise our Lord as the Wisdom of God spoken of in the Book of Proverbs, it is traditional that all churches named after Holy Wisdom or Hagia Sophia celebrate their feast on this day. In fact, Greek scholar Constantine Kalokyre has written a study titled "The Churches of the Wisdom of God and the Date of their Celebration", which appeared in the periodical Saint Gregory Palamas, no. 71 (723) (1988), pp. 538-617. In this study he comes to the conclusion that the Great Church of Hagia Sophia in Constantinople celebrated its feast day on Mid-Pentecost.