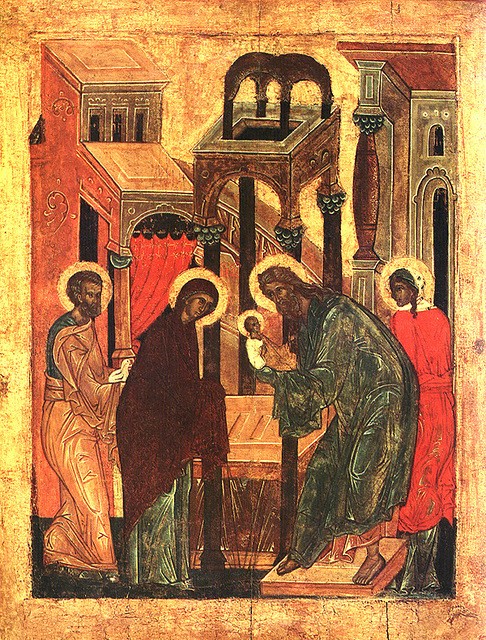 THE MEETING of the LORD in the TEMPLE  (Feb. 2)

Meeting of the Lord in the Temple ~ Feb 2 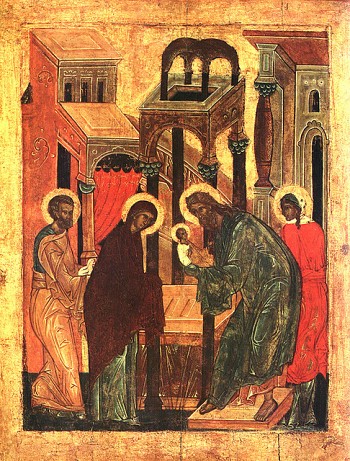 Today the Church commemorates an important event in the earthly life of our Lord Jesus Christ (Luke 2:22-40).

Forty days after His birth the God-Infant was taken to the Jerusalem Temple, the center of the nation's religious life. According to the Law of Moses (Lev. 12:2-8), a woman who gave birth to a male child was forbidden to enter the Temple of God for forty days. At the end of this time the mother came to the Temple with the child, to offer a young lamb or pigeon to the Lord as a purification sacrifice. The Most Holy Virgin, the Mother of God, had no need of purification, since she had given birth to the Source of purity and sanctity without defilement. However, she humbly fulfilled the requirements of the Law.

At this time the righteous Elder Simeon (February 3) was living in Jerusalem. It had been revealed to him that he would not die until he should behold the promised Messiah. By inspiration from above, St Simeon went to the Temple at the very moment when the Most Holy Theotokos and St Joseph had brought the Infant Jesus to fulfill the Law. 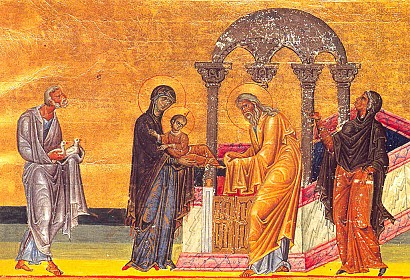 The God-Receiver Simeon took the divine Child in his arms, and giving thanks to God, he spoke the words repeated by the Church each evening at Vespers: "Lord, now lettest Thou Thy servant depart in peace, according to Thy word, for mine eyes have seen Thy salvation, which Thou hast prepared before the face of all people, a light to enlighten the Gentiles, and the glory of Thy people Israel" (Luke 2:29-32). St Simeon said to the Most Holy Virgin: "Behold, this child is set for the fall and rising again of many in Israel, and for a sign which shall be spoken against. Yea, a sword shall pierce through your own soul also, that the thoughts of many hearts may be revealed" (Luke 2:34-35).

At the Temple was the 84-year-old widow Anna the Prophetess, daughter of Phanuel (February 3), "who did not leave the temple, but served God with fasting and prayers night and day. She arrived just when St Simeon met the divine Child. She also gave thanks to the Lord and spoke of Him to all those who were looking for redemption in Jerusalem" (Luke 2:37-38). In the icon of the Feast she holds a scroll which reads: "This Child has established Heaven and earth."

Before Christ was born, righteous men and women lived by faith in the promised Messiah, and awaited His coming. The Righteous Simeon and the Prophetess Anna, the last righteous people of the Old Testament, were deemed worthy to meet the Savior in the Temple.

The Feast of the Meeting of the Lord is among the most ancient feasts of the Christian Church. We have sermons on the Feast by the holy bishops Methodius of Patara (+ 312), Cyril of Jerusalem (+ 360), Gregory the Theologian (+ 389), Amphilocius of Iconium (+ 394), Gregory of Nyssa (+ 400), and John Chrysostom (+ 407). Despite its early origin, this Feast was not celebrated so splendidly until the sixth century.

In 528, during the reign of Justinian, an earthquake killed many people in Antioch. Other misfortunes followed this one. In 541 a terrible plague broke out in Constantinople, carrying off several thousand people each day. During this time of widespread suffering, a solemn prayer service (Litia) for deliverance from evils was celebrated on the Feast of the Meeting of the Lord, and the plague ceased. In thanksgiving to God, the Church established a more solemn celebration of this Feast.

Church hymnographers have adorned this Feast with their hymns: St Andrew of Crete in the seventh century; St Cosmas Bishop of Maium, St John of Damascus, and St Germanus Patriarch of Constantinople in the eighth century; and St Joseph, Archbishop of Thessalonica in the ninth century.

Rejoice, O Virgin Theotokos, full of grace!
From you shone the Sun of Righteousness, Christ our God.
Enlightening those who sat in darkness!
Rejoice, and be glad, O righteous elder;
You accepted in your arms the Redeemer of our souls,
Who grants us the Resurrection.

By Your nativity, You did sanctify the Virgin's womb,
And did bless Simeon's hands, O Christ God.
Now You have come and saved us through love.
Grant peace to all Orthodox Christians, O only Lover of man!


The Spiritual Significance of the Meeting in the Temple 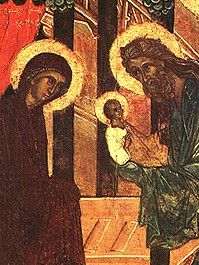 The events which gave rise to one of the twelve major feasts of the Lord, the feast of the Meeting, are, in the spiritual sense, multidimensional.

The word “meeting” does not convey the full meaning of the Church Slavonic word, sretenie. Those who meet are usually equals. “But here,” as Metropolitan Benjamin (Fedchenkov) notes, “the Slavonic word, sretenie, is more appropriate, because it speaks of the lesser going out to meet the greater; people, meeting God”[1] The events in the Jerusalem temple are of particular significance. The Divine Law-Giver Himself, as one Who is the image of the invisible God, the firstborn of every creature (Col. 1:15), and as the first-born of a Virgin (Mt. 1:25) is brought as a gift to God. This symbolic act is as a beginning of the service which will end on earth by a great event: The incarnate Son of God brings Himself entirely to the Father unto the redemption of mankind—who He met earlier in the person of holy righteous Simeon. For mine eyes have seen thy salvation, which thou hast prepared before the face of all people; a light to lighten the Gentiles, and the glory of thy people Israel (Lk. 2:30–32).
By its thought and expression, this song of thanksgiving originates from portions of the book of the Prophet Isaiah: And in that day there shall be a root of Jesse, and he that shall arise to rule over the Gentiles; in him shall the Gentiles trust, and his rest shall be glorious (Is. 11:10). Jesse was the father of King David. Therefore, the root of Jesse, the Messiah-Christ whom people awaited, the Son of David (cf. Mt. 1:1), Who, as two thousand years of history has shown, would become a sign of contention. This sign divides people into the believing and the unbelieving, those who love the light, and those who love darkness. “What is this sign of contention? It is the sign of the cross, which the Church confesses as being salvific for the whole world” (St. John Chrysostom). The meeting of God and man, which first took place in the Jerusalem Temple, must become a personal event for every individual. The path of salvation must begin for each person by a meeting with Jesus Christ as his personal Savior. Until this meeting takes place, one remains sitting in darkness … and the shadow of death (cf. Mt. 4:16).

On the fortieth day after the Nativity of the Infant God, another meeting also occurred—the Old Testament church and the Church of the New Testament. All the Gospel stories are penetrated with the motif of the precise fulfillment of the Law of Moses: the forty-day period of purification prescribed by Leviticus (cf. 12:2–4), the dedication of the first-born son to God (cf. Num. 3:13), and His symbolic ransom (cf. Ex. 13:13). Nevertheless, it is easy to see that the spiritual center of the events described is carried over into New Testament history. Now (Lk. 2:20) means that the time awaited by many generations for the Messiah has come. Holy righteous Simeon speaks of his departure from this world (the phrase, lettest Thou Thy servant depart is shown in both Greek and Slavonic as a present tense verb). Elder Simeon’s inspired speech is filled with praise and thanksgiving to God for fulfilling the time of the promise. According to patristic tradition, the holy Prophet Zachariah, father of St. John the Forerunner, placed the Most Holy Virgin—who came according to the law to fulfill the ritual— not in the place for women who come for purification, but in the place of virgins (married women were not allowed to stand there). When the scribes and Pharisees began expressing their displeasure, Zachariah announced that this Mother remains a Virgin and pure, even after giving birth: “Therefore I have not removed this Mother from this place appointed for virgins, because She is higher than all virgins.”

The third meeting has an ultimately personal character. For Elder Simeon, the day had come for which he had waited unusually long. It was promised to him that he would see the Savior of the world, born of an Ever-Virgin. Righteous Simeon, distinguished by his extraordinary honesty, a wise man who knew the Divine Scriptures well, labored together with seventy-two translators on the island of Pharos off Alexandria in the 380’s BC, translating the Old Testament from Hebrew into Greek. As he was translating the book of the Prophet Isaiah, he came to the words, behold, a virgin shall conceive in the womb, and shall bring forth a son (Is. 7:14). Reading this, he doubted, supposing that it is impossible for a woman to give birth without a husband. Simeon took a knife and wanted to scrape these words from the scroll, to change the word “virgin” into “woman”. But at that moment an angel of the Lord appeared to him, took his hand, and said, “Have faith in the words written, and you yourself will see their fulfillment, for you shall not see death before you shall see Christ the Lord, born of a pure Virgin.” Believing the angel’s words, Elder Simeon impatiently waited for Christ’s coming into the world, and he led a righteous and pure life. According to tradition, Elder Simeon was vouchsafed a blessed repose in the 360th year of his life. His holy relics were translated during the reign of Emperor Justinian the Younger (565–578) to Constantinople and placed in the altar of the Holy Apostle James, in the church of the Agiosoritissa.

The prayer of St. Simeon the God-Receiver (Now lettest Thou Thy servant depart in peace, O Master) in sung (on feast days) or read (during simple services) at each Vespers service, so that at the close of each day, every believer would remember the meeting of his life, which will end in departure from this temporal life. We must live in peace with God and fulfill the Gospel commandments, so that—like Simeon—we might meet that bright and never-ending day in the Kingdom of Heaven.

Also on this Day . . .
On this day we also commemorate the icon of the Most Holy Theotokos
known as "the Softening of Evil Hearts" or "Simeon's Prophecy." The Mother of God is depicted without Her Child, with seven swords piercing her breast: three from the left side, three from the right, and one from below.

A similar icon, "Of the Seven Swords" (August 13) shows three swords on the left side and four from the right.

The icon "Simeon's Prophecy" symbolizes the fulfillment of the prophecy of the righteous Elder Simeon: "a sword shall pierce through your own soul" (Luke 2:35).

More Reflections on the Meeting of the Lord . . . 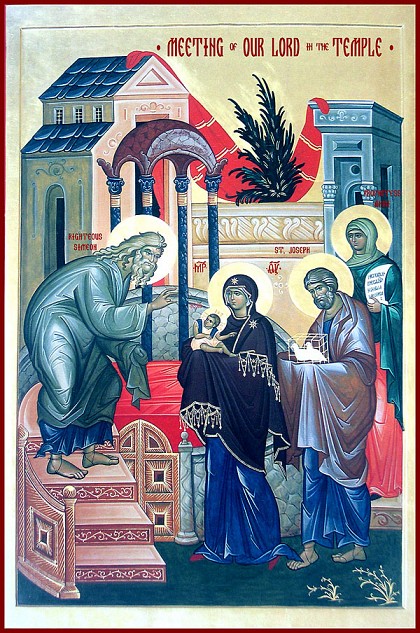 Here we offer a collection of links to more articles and meditations exploring this beautiful and meaningful feast:

Origins of the Feast of the Presentation of Christ

Does The Pure One Have Need of Purification?

- featuring a homily from the Ven. Bede

Receiving Christ In Our Soul