BRIGHT WEEK ~ The First Week of the New Creation 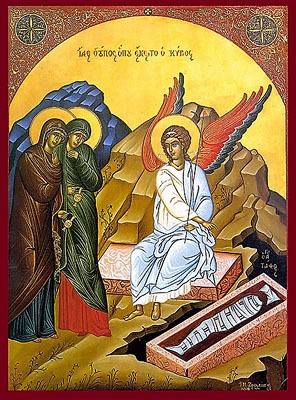 Every day during the week of Easter, called Bright Week by the Church, the paschal services are celebrated in all their splendor.

The Easter baptismal procession is repeated daily. The royal gates of the sanctuary remain open. The joy of the Resurrection and the gift of the Kingdom of eternal life continue to abound. Then, at the end of the week, on Saturday evening, the second Sunday after Easter is celebrated in remembrance of the appearance of Christ to the Apostle Thomas “after eight days” (Jn 20:26).
It is important to note that the number eight has symbolical significance in both Jewish and Christian spiritual tradition. It signifies more than completion and fullness; it signifies the Kingdom of God and the life of the world to come since seven is the number of earthly time. The sabbath, the seventh day, is the blessed day of rest in this world, the final day of the week. The “first day of the week,” the day “after Sabbath”; stressed in all of the gospels as the day of Christ’s Resurrection (Mk 16:1, Mt 28:1, Lk 24:1, Jn 20:1, 19), is therefore also the "eighth day,” the day beyond the confines of this world, the day which stands for the life of the world to come, the day of the eternal rest of the Kingdom of God (see Hebrews 4).

From The Orthodox Faith, by Fr Thomas Hopko, OCA Website

PASCHA ~ The First Day of the New Creation

THE HOURS OF PASCHA

- For the week after Pascha (Bright Week), we use the special Hours of Pascha. This brief service features some of the most beautiful and meaningful hymns of the Pascha Liturgy. Keep the Light of Pascha burning by using this powerful prayer service!

Remember - from Pascha to Ascension we do not offer the prayer to the Holy Spirit, but instead begin our prayers by chanting thrice the Paschal Troparion: 'Christ is risen from the dead, trampling down death by death, and upon those in the tombs bestowing life.'

Download and Print the Hours of Pascha in PDF format. 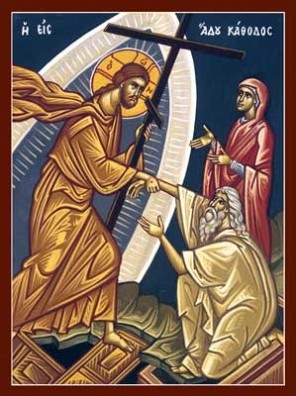 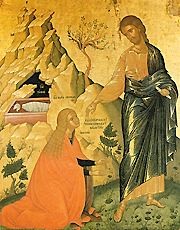 The Risen Lord Appears to Us Each

Today we should give thought to one important thing that not everyone remarks upon when turning to Holy Scripture, when reading about those bright days during which the Lord appeared after His Resurrection. He appeared to many, and to each person differently. In one circumstance it was the weeping Mary Magdalene, lonely and grieving at the empty tomb; in another it was Peter, bewildered and confused, having returned from the garden where He had found the stone rolled away from the tomb. Then we see the disciples on the sea. John senses Him in his heart and recognizes Him, while Peter throws himself into the sea and hurries to Him. And, as we read in the epistles of the Apostle Paul, among the last to whom the Lord appeared was he, Paul-Saul, who had persecuted the Church of God.

This continues even now. Christ, risen invisibly, appears tangibly to each person. In the lives of each of us who has felt the proximity of other worlds if only for a moment, a meeting with the Risen Lord is accomplished; He comes to each person, knocking at the door of his heart, finding words for each. It is our task to listen, our task to respond to this knocking, for the Lord has come to save, spiritualize, and transform the lives not just of everyone, but of each one of us.

Therefore today, on this Paschal day, let each of you, returning home, carry in his heart this joy and the thought that the Lord has appeared to me, too. He is risen for me, and speaks for me, and remains with me, and will forever be as my Lord, as my Savior, as my God. May the Lord protect you!