| Midwest Diocese
All Saints of North America
The Sunday of All Saints of North America is always the Sunday following All Saints, which is the second Sunday after Pentecost.
2019 Schedule:
This popular section features links to outstanding resources on numerous saints and righteous ones. Watch for ongoing updates as we commemorate our beloved pastors, archpastors and defenders of Orthodoxy who have shown forth in North America!
Also, be sure to visit our Great Saints of the Church page, which features unique articles and lives of saints. Recently added:
Mapping the North American Saints

...its history, lives of saints and righteous ones, writings, and articles about the unique challenges facing us as Orthodox Christians living and struggling in American society and culture. 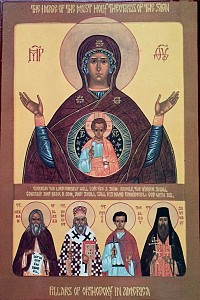