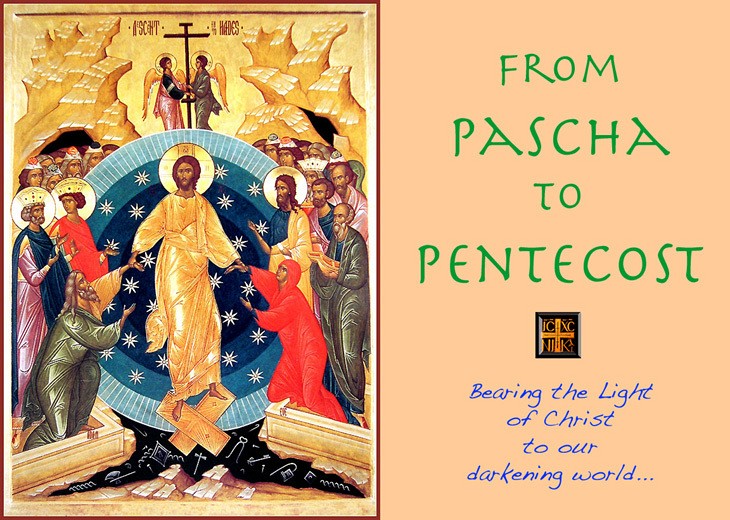 CHRIST IS RISEN!  INDEED HE IS RISEN!

Greetings on the Feast of Feasts, Pascha, the Resurrection of the Lord!

Special Sections for the Pascha-to-Pentecost Season:

Paschal Meditations from Fr. Steven - Immerse yourself in the Pascha to Pentecost Season with this extensive selection of memorable theological and pastoral writings by our beloved pastor, Fr. Steven Kostoff. Featuring the following classics:

Bright Week (from Pascha to Thomas Sunday) - Articles and the Special Paschal Hours which replace the regular prayers of the Church.

The Sundays of Pascha - An excellent summary by Fr Thomas Hopko of the messages of the Paschal Sundays, with special in depth-sections on each Sunday.

Midfeast of Pentecost - This special page delves into the profound feast celebrated on the twenty-fifth day after Pascha, the mid-way point between Easter and Pentecost, and its theme of the living water of the Holy Spirit.

Ascension - Christ's glorification at the right hand of the Father points to our destiny as children of God. Learn about this essential feast and its prophetic place in God's plan for our salvation.

Pentecost -  The outpouring of the Holy Spirit upon the Apostles fifty days after Christ's resurrection begins the Age of the Spirit, the Age of the Church, and the Last Times, as we anticipate Christ's return in glory.


Scroll down for articles, icons, and more, centered on the Resurrection of Christ...

Join us as we celebrate the Resurrection of Christ! 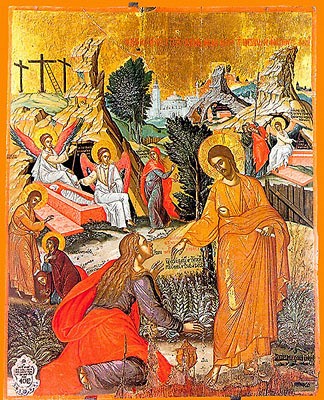 A little before midnight on the Blessed Sabbath the Nocturne service is chanted. The celebrant goes to the tomb and removes the winding-sheet. He carries it through the royal doors and places it on the altar table where it remains for forty days until the day of Ascension.

At midnight the Easter procession begins. The people leave the church building singing: "The angels in heaven, O Christ our Savior, sing of Thy resurrection. Make us on earth also worthy to hymn Thee with a pure heart."

The procession circles the church building and returns to the closed doors of the front of the church. This procession of the Christians on Easter night recalls the original baptismal procession from the darkness and death of this world to the night and the life of the Kingdom of God. It is the procession of the holy passover, from death unto life, from earth unto heaven, from this age to the age to come which will never end. Before the closed doors of the church building, the resurrection of Christ is announced. Sometimes the Gospel is read which tells of the empty tomb. The celebrant intones the blessing to the “holy, consubstantial, life-creating and undivided Trinity.” The Easter troparion is sung for the first time, together with the verses of Psalm 68 which will begin all of the Church services during the Easter season.


Let God arise, and let His enemies be scattered;Let those who hate Him flee from before His face!

The people re-enter the church building and continue the service of Easter Matins which is entirely sung. The canon hymns of Christ’s resurrection, ascribed to St John of Damascus, are chanted with the troparion of the feast as the constantly recurring refrain. The building is decorated with flowers and lights. The vestments are the bright robes of the resurrection. The Easter icon stands in the center of the church showing Christ destroying the gates of hell and freeing Adam and Eve from the captivity of death. It is the image of the Victor “trampling down death by his own death.” There is the continual singing and censing of the icons and the people, with the constant proclamation of the celebrant: Christ is risen! The faithful continually respond: Indeed he is risen!

From The Orthodox Faith, by Fr Thomas Hopko, OCA Website 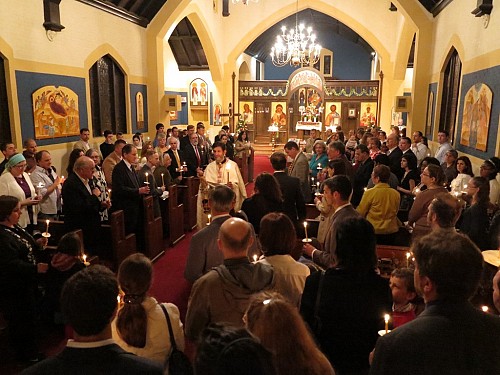 REMEMBER,
we do not offer the opening prayer to the Holy Spirit, "O Heavenly King, O Comforter," until Pentecost! Instead we sing "Christ is Risen from the dead, trampling down death by death! And upon those in the tombs bestowing life!" This Paschal Troparion is sung until Ascension Thursday.
THE HOURS OF PASCHA  - The special prayers prescribed to be read in place of the usual Morning and Evening Prayers, the Hours, and the Prayers of Thanksgiving After Holy Communion from Pascha Sunday to the Thomas Sunday.

ORTHODOX CHRISTIAN MEDITATIONS, by our pastor, Fr. Steven Kostoff.  Fr. Steven's own meditations, interspersed with brief insights from saints and fathers of the Orthodox Church, present a golden thread through the Paschal Season, nowhere more evident than in this featured article:

FROM PASCHA TO PENTECOST - A rich and comprehensive article from the MYSTAGOGY blog, covering the entire period from Pascha through to the Apostles' Fast and the Feast of Sts Peter and Paul.
Icons from the Pentecostarion through All Saints 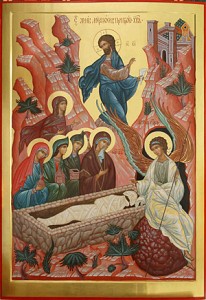 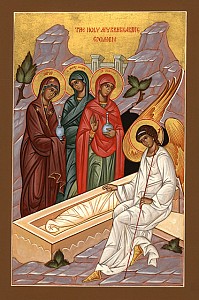