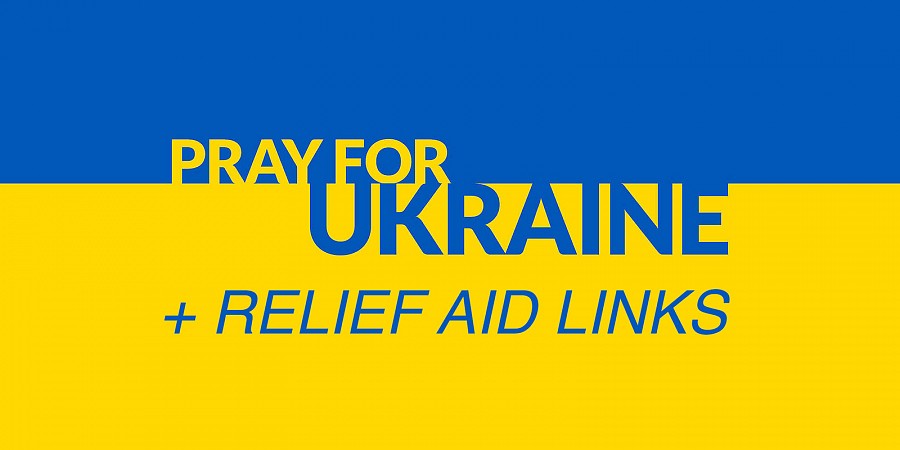 Article: The Moral Defeat of the Russian World 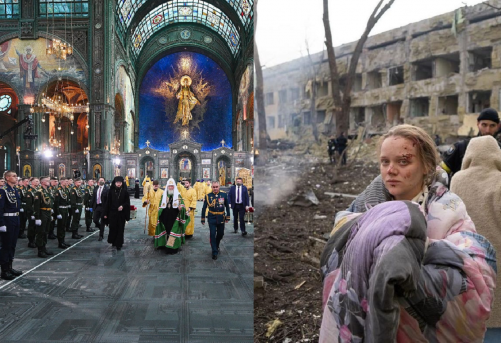 If you are concerned about the war in Ukraine, the fate of the people of Ukraine, and the potential fallout from this war; but also about the world's perception of the Orthodox Church based upon Patriarch Kyrill of Moscow's disgraceful support of "Putin's war," then here is an article/essay that you need to read. (Deacon) Pavel Gavrilyuk is an outstanding patristic scholar, and we need to be grateful to our prominent theologians and writers for speaking out boldly in a prophetic spirit against the war, and against the indefensible defense of war by certain hierarchs in the Church. We need to hear more from our Church hierarchs, who are being morally compromised just by their silence. Thank God the Church is not limited to the hierarchy!

Recommended Commentary on the War in Ukraine 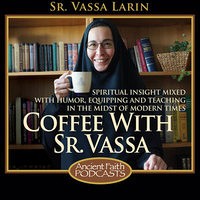 From Fr Steven's recent emails to the parish...

(3/23) This link is to a recently-published article by our parishioner, Dr. Scott Kenworthy (Miami University, Oxford OH). Scott offers a brief, but succinct, explanation of the current Church-State relations in the Russian Federation, with the history behind it.

(3/16, 3/19) Many of you are familiar with Sister Vassa, an Orthodox nun who is a member of ROCOR - The Russian Orthodox Church Outside of Russia (no comment on that for the moment). She has a very popular YouTube program on which she addresses issues and questions concerning the Orthodox Christian Faith. Her style is informal and lively.

Here is a recent talk of hers about the war in Ukraine. It is a bit long (38 minutes), but it is bold and brave, indeed. I would highly recommend listening to her trenchant commentary from a genuine Orthodox theological/spiritual perspective. There is an expression: call it like it is. Here is a fine example of that when it really counts...

She was very articulate, meaning great clarity and conviction informed her comments on this "despicable war" that is claiming so many innocent lives. She spoke of fratricide and infanticide. Some of her most trenchant comments were reserved for the Orthodox hierarchy and other Orthodox Christians - primarily Russians - for their silence or complicity in supporting this war. If you have yet to see and listen to Sister Vassa, I would strongly urge you to do so:

James Hill an American died in Ukraine today (Thursday ) He was in line to buy bread so he could take some food to his partner Iyrena in the hospital. She had been ill for a while with MS. We think that Iyrena and her mother and Jim had gone there for her treatment before the war had began.

Others also died with him while waiting in line.

His sister Katya (Orthodox) who is a local friend of ours called us this morning to give us the news…this is a link to the story from a Minnesota news station where he grew up.

The situation in Ukraine is desperate and worsens by the hour. The unprovoked attack on this sovereign country by Vladimir Putin and the Russian military is already a humanitarian crisis unknown to Europe since WW II. There are over a million refugees fleeing Ukraine as of now, and the number grows daily. It is very difficult to find the words to fully express the murderous devastation unleashed by Putin upon an innocent people that he claims, as a Russian, to have such close historical, cultural and religious ties with. Perhaps we can say there is something deeply sinister and even hideous in Putin's willingness to slaughter the Ukrainian people in order to fulfill his fantasy of restoring the former Soviet Empire. As the death toll rises among innocent men, women, and children, it is deeply troubling to sit back and watch this in the comfort of our homes.

How can we fathom the horror of having a sick tyrant do whatever is necessary to destroy Ukraine - a free, democratic country. For that is clearly his goal, as Kremlin watchers inform us. There is no "off ramp" at this point in time for Putin to exit onto. This is not the time to call Putin a "genius," or tell us how "sophisticated" he is. Vladimir Putin is a corrupt, autocratic thug, and he has made himself a pariah in the eyes of the civilized world. It is clear that many Russian people are vehemently opposed to this war, and I can only hope that their numbers increase to the point that he cannot jail or silence them all. As a ray of light, we are deeply moved by the courage and resolve of the Ukrainian people as they offer their lives in defense of their homeland. What a contrast between President Volodymyr Zelensky and Putin!

On the "spiritual level," Putin poses as an Orthodox Christian. Meaning, we can assume that he was baptized as an Orthodox Christian (as was Joseph Stalin); and he appears publicly in church either venerating an icon, crossing himself, lighting a candle, or receiving a blessing from the patriarch. As I have said to others, as Orthodox Christians this can only embarrass us and fill us with shame. His actions are not only "un-Christian," they are completely anti-Christian. (If a Ukrainian considered him to be an antichrist figure, who will argue against that?). Would a Christian leader unleash his war machine against his fellow innocent Orthodox Christians on the eve of Great Lent? Is Putin aware that Forgiveness Sunday is fast approaching? Ukrainian Christians are taking up their personal crosses as Great Lent guides them to Golgotha and the Cross of Christ. Is Putin aware that by next Monday Orthodox Christians across the world enter into the "School of Repentance?” These questions may seem naive in the world of realpolitik, but there are Orthodox Christians - including here in America - who commend Putin for his piety and visibility in the Church. This is profoundly misguided and misleading.

Are his actions what we would want or expect from an Orthodox Christian leader supposedly defending traditional Christian values? I just saw a video of a young evangelical Christian woman praise Putin as a "Christian nationalist" who protects Christian values. What values would those be? I have no idea as to whether or not Putin approaches the Chalice for Holy Communion. If so, and if Patriarch Kyrill of Moscow had any courage, shouldn't he excommunicate Putin? Just one example: We tell young people in love that if they choose to have sex outside of marriage then they should not approach the Chalice. Can the Church, then, with any integrity, allow a mass murderer guilty of war crimes to receive the Eucharist?

Here is a powerful critique, if not a rebuke, of those members of our hierarchy, beginning with Patriarch Kyrill of Moscow and All Russia, who have responded with bland admonishments to "seek and pray for peace" over the war in Ukraine. None of these hierarchs here criticized by Archdeacon John Chryssavgis have denounced Putin's actions for what they are: The immoral and sinful actions of a twisted mind that should be denounced by the Church with the same vehemence as secular writers denounce him. Pious phrases and appeals to humility cannot mask outright evil. Once we realize that that is what we are dealing with, we will then be able to appreciate the victory of Christ over all evil and death itself. 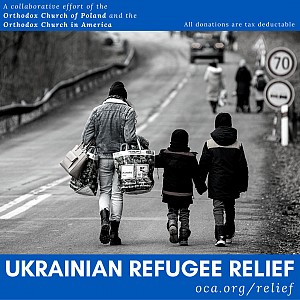 Liturgical and Personal Prayers for Ukraine -

Please go to this page on our Midwest Diocesan website, to have access to a series of prayers on behalf of Ukraine and the Ukrainian people in their hour of great travail. And we pray for all of the soldiers - Russians and Ukrainian - who will perish in a war that never should have happened. Those lives are the price for authoritarian/totalitarian rule: No respect for life or liberty.

Supporting Ukraine - There are various ways that we are able to offer assistance to Ukraine:

Here is a way through our Midwest Diocese:

DOM to Raise Funds for those Suffering in Ukraine – Diocese of the Midwest (domoca.org)

Donate through the Ukrainian Education Center 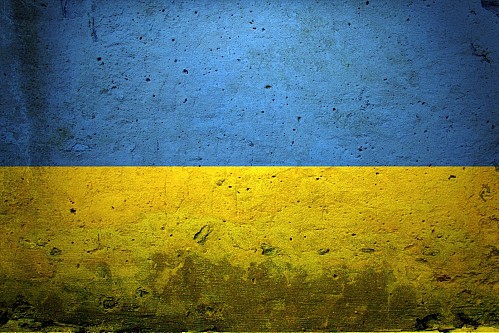 The horrific war in Ukraine has some touched persons within our own parish family. Here is an instance from the Hanauer family, as you will read below. We have been informed of many ways to donate to the relief of the much-suffering people of Ukraine, and here is another for our consideration.

Most of you know that Joshua and I lived in Kyiv, Ukraine in 2002-2003. We have been so distressed to see all the images of the places we walked in Kyiv being destroyed, and even more so considering the loss of human lives. Many of our friends moved away years ago, but the ones who remained have escaped to Slovakia and are safe, thank God. The organization we worked for while living there has changed gears in order to raise money and coordinate aid to terrorized people all over the country. I’m sharing this link far and wide hoping that if you, like me, have wondered how to help, here is one small way.

Thank you for considering a donation.


Today the UEC Board of Directors approved the launch of our Ukrainian Relief Fund. More importantly, through our relationships in Slovakia, Poland, and Ukraine we are confident we can get funds to people we know who need our help now. Funds will be used to provide food and medicine for those still trapped in Ukraine, assistance to those who have fled, and special support for families with small children.

We have established a committee of Ukrainians and Americans to oversee the funds and have created an internal controls policy to ensure that funds are being accounted for and used appropriately.

So I ask you to give generously. Gifts made through PayPal are easily accessed by our team and can be transferred quickly.

This is our "for such a time as this"moment. Please make a gift today.

Checks may also be mailed to

We will provide regularly updates at www.uecandme.org.

Chris Lovingood
For the UEC Board 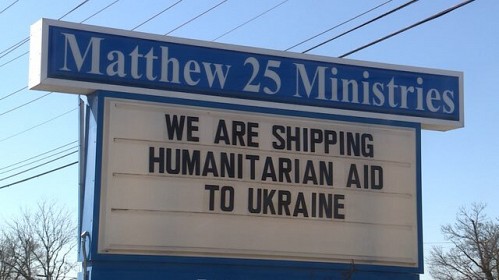 Also, I received this letter from one of our inquirers this morning, Bailey Jacobs, for those who would like to use this system of offering aid to the besieged Ukrainian people:

I will be praying for peace in Ukraine and the monastery of St. George in Rovno. I think I heard someone at the liturgy yesterday mention wanting to send aid to Ukraine. I'm not sure if you already have contacts there to send to but my organization, Matthew 25: Ministries in Blue Ash, has partners on the ground there and will be sending ongoing aid to help refugees and displaced people.

Matthew 25 is accepting monetary donations as well as donations of clothing, personal care products, paper products, and first aid items. Here is the link to our webpage for more information
https://m25m.org/disaster/ukraine22/ or if you have any questions you can email info@m25m.org.

Also, people can also volunteer and help sort donations for our shipments of aid. Volunteers can come anytime between 9 AM - 4 PM, Monday -Friday, and 9 AM - 3 PM on Saturday (pre-scheduling is encouraged). Here is the link to our volunteer page if you are interested in learning more,
https://m25m.org/help/volunteering/.

Thank you and hope you have a good week,
Bailey

Watch & read this news story by WLWT5 on Matthew 25's response to the Ukraine war.