Hopefully, we will close out this summer's Bible Study "with a bang" and not "with a whimper!" Meaning I hope to see all of you for our final session.

We will discuss Heb. 13, the final chapter of the Epistle, which is filled with exhortations to a Christ-centered mode of life.

As we move into the heart of the Epistle to the Hebrews, we will more and more encounter discussion of the Levitical priesthood and how it is now inadequate because of the high priesthood of Christ. I thought to pass on a link to a scholarly summary of the OT priesthood that you may want to look over before or while we cover these chapters beginning tomorrow evening. We can discuss this in greater detail if necessary in our class. 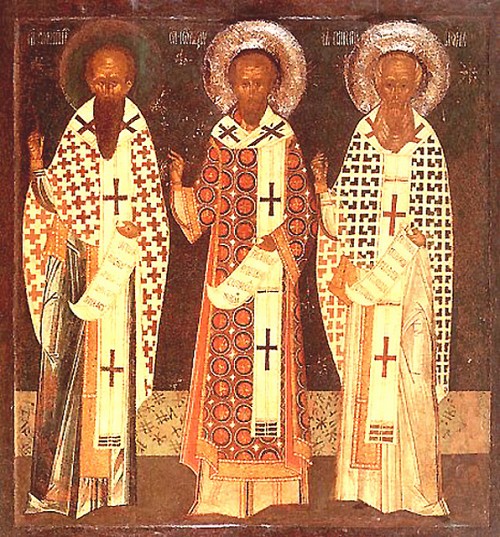 June 13, 2019
Dear Bible Study Group,
Bit of a slim group yesterday evening, but we had a good session with a great deal of lively discussion. Our primary focus was on the implications of the Incarnation, as so strongly and profoundly emphasized in Heb. 2.
Also, the great paschal theme of the destruction of "death by death." And it was that lively discussion that confined yesterday's session to Heb. 2.
So, we will begin with ch. 3 next Wednesday evening. There was a handout of Patristic texts that offered some deep commentary on the Epistle to the Hebrews. I am attaching that handout here for those who may want to have a copy for reference. I would highly recommend reading the text from St. John Chrysostom commenting on Heb. 2:18:  "For because he himself has suffered and been tempted, he is able to help those who are tempted." It is the last text on p. 1 of the handout. We didn't quite manage to get there yesterday evening.
Fr. Steven
Patristic Texts on Hebrews Ch. 2
Reflections and Resources from Session I
May 30, 2019
Dear Bible Study Participants,
CHRIST IS RISEN!
INDEED HE IS RISEN!
I thought we had an excellent opening session to this summer's Bible Study yesterday evening. The opening chapter of Hebrews can have that effect! It is a magnificent description of the Son of God in his divinity and humanity. As we discussed it last night, it would be insightful to compare Heb. 1:14 with Jn. 1:1-18 and Col. 1:15-20. In these passages we encounter a consistent "high Christology" in the unique language of three inspired authors.
I thought to share a succinct summary from Archbishop Dmitri on the Heb. 1 from his commentary:
The first chapter of Hebrews very skillfully identifies the Person who is the subject of the whole Epistle. He is the Son of God, the express Image of the Father. He is eternal and unchangeable, and was the active agent in the creation itself. He is not an angel and was not created, for the angels were created to be ministers and servants of God's will. The same Son became one with the human race, taking on our nature, without ceasing to be what He always was. As God-Man, He purged our sins, made us heirs to salvation, and gave us eternal life.
This identity is revealed in a recurring interweaving of references to the Son in His eternal being and in His work as the God-Man and Prophet (God spoke to us through His Son - v. 2), as Priest (He Himself purged our sins - v. 3) and that He obtained a more excellent name than the angels (v. 4), that is, Lord.
The Hebrews to whom the Epistle is addressed should have been the first to recognize this Person - Jesus Christ. They had been prepared to know Him by the prophets, among whom the principal is David, as the several quotations from the Psalms show.  (p.27-28)
This Commentary by Archbishop Dmitri is consistently good and as it is a verse-by-verse Commentary of the entire Epistle, and is filled with patristic commentary, I would recommend it as supplementary reading. For those who may be interested, here is a link to SVS Press, both e-book and hard copy:
https://www.svspress.com/epistle-to-the-hebrews-a-commentary-the-e-book/
https://www.svspress.com/epistle-to-the-hebrews-a-commentary-the/
The Bible Study will resume on Wednesday, June 12. Next week we will celebrate the Feast of the Ascension with a Vesperal Liturgy - a key theme in Hebrews!
Fr. Steven
Scroll down for more resources and info on this year's Summer Bible Study...
Join us for our 2019 Summer Bible Study, Wednesday evenings beginning May 29

Dear Parish Faithful,
CHRIST IS RISEN!  INDEED HE IS RISEN!
Please note the attached flier announcing this Summer's Parish Bible Study.
The title is:  JESUS CHRIST the GREAT HIGH PRIEST - 'The same yesterday, today, and forever'.  This is based on the deeply profound Epistle to the Hebrews, which we just read during Great Lent.
Fr. Steven
+ + +
As always, all are welcome! Bring a friend and introduce them to the Orthodox Faith through our in depth study and discussion of the divine scriptures.
Class notes and study questions will be posted throughout the Summer, which makes it easy and enjoyable to "keep up," even if you can't make it to every session.
NOTE: No class on Wed. June 5, due to Vesperal Liturgy for the Great Feast of the Ascension. Join us for Ascension, and class will resume Wed. June 12.
Scroll down for more info . . .
An Introduction to the Epistle to the Hebrews

The Epistle to the Hebrews

from The Orthodox Faith

Virtually none of the modern scriptural scholars think that Saint Paul is the author of the letter to the Hebrews. The question of the exact authorship of this epistle was questioned early in Church Tradition with the general consensus being that the inspiration and doctrine of the letter is certainly Saint Paul’s, but that perhaps the actual writer of the letter was one of Saint Paul’s disciples. The letter is dated in the second half of the first century and is usually read in the Church as being “of the holy apostle Paul.”

The letter to the Hebrews begins with the clear teaching about the divinity of Christ, affirming that God, Who “in many and various ways . . . spoke of old to our fathers” has “in these last days . . . spoken to us by a Son, Whom He appointed the heir of all things, through Whom He also created the world” (1.1–2).

He (the Son of God) reflects the glory of God and bears the very stamp of His nature (or person), upholding the universe by the word of His power (1.3).

He Himself . . . partook of the same nature (of human flesh and blood), that through death He might destroy him who has the power of death, that.is, the devil, and deliver all those who through fear of death were subject to lifelong bondage . . . (being) made like His brethren in every respect, so that He might become a merciful and faithful highpriest in the service of God, to make expiation for the sins of the people. For since He Himself has suffered and been tempted, He is able to help those who are tempted (2.14–18).

The main theme of the letter to the Hebrews is to compare the sacrifice of Christ to the sacrifices of the priests of the Old Testament. The Old Testament priests made continual sacrifices of animals for themselves and the sins of the people, entering into the sanctuary of the Jerusalem temple. Christ makes the perfect and eternal sacrifice of Himself upon the cross, once and for all, for the sins of the people and not for Himself, entering into the heavenly sanctuary, not made by hands, “to appear in the presence of God on our behalf” (9.24). This is the perfect and all fulfilling sacrifice of the one perfect high priest of God Who was prefigured in the mysterious person of Melchizedek, in the Old Testament, as well as in the ritual priesthood of the Levites under the old law which was “but a shadow of the good things to come” and not yet the “true form of these realities” (10.1, See Gen 14, Ex 29, Lev 16, Ps 110).

Through the perfect sacrifice of Christ, the believers receive forgiveness of sins and are “made perfect” (11.40), being led and disciplined by God Himself Who gives His Holy Spirit that through their sufferings in imitation of Christ, His people “may share in His holiness” (12.10). This is effected, once again, not by the ritual works of the law which “made nothing perfect” (7.19), but by faith in God, without which “it is impossible to please Him” (11.6).

The letter to the Hebrews, which is read in the Orthodox Church at the divine liturgies during Great Lent, ends with the author’s appeal to all to “be grateful for receiving a kingdom which cannot be shaken” and to “offer to God acceptable worship with reverence and awe; for our God is a consuming fire” (12.28). It calls as well for love, faith, purity, generosity, strength, obedience and joy among all who believe in “Jesus Christ (Who) is the same yesterday and today and for ever” (13.8).