GREAT LENT QUICK LINKS:
Great Lent - Main I Pre-Lenten Period I Lenten Worship I On Fasting I On Confession 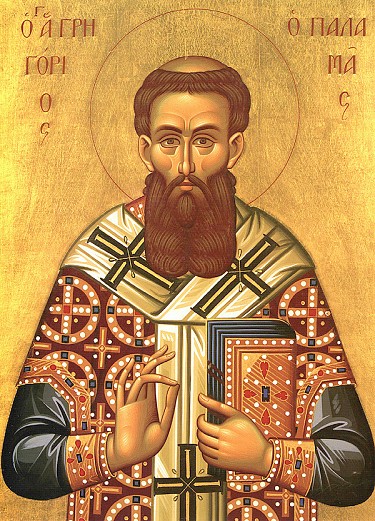 Synaxarion for the Second Sunday

St Gregory Palamas
On the Second Sunday of the Fast,
we celebrate the memory of our Father among the Saints,
Gregory Palamas, Archbishop of Thessalonica.

Verses
The Fountain of light leadeth unto the unwaning light
The radiant herald of the light and the truly great mind.

Apolytikion in Plagal of the Fourth Tone
Light of Orthodoxy, pillar and teacher of the Church,
adornment of monastics, invincible champion of theologians
O Gregory, wonderworker, boast of Thessalonica, herald of grace:
ever pray that our souls be saved.

Kontakion in Plagal of the Fourth Tone
With one accord, we praise you as the sacred and divine vessel of wisdom and clear trumpet of theology
O our righteous Father Gregory of divine speech.
As a mind that stands now before the Primal Mind, do you ever guide aright and lead our mind to Him
that we all may cry: Hail, O herald of grace divine.
Another Kontakion, of the Fourth Tone
Now is the time for action! Judgment is at the doors!
So let us rise and fast, offering alms with tears of compunction and crying:
"Our sins are more in number than the sands of the sea;
but forgive us, O Master of All,
so that we may receive the incorruptible crowns." 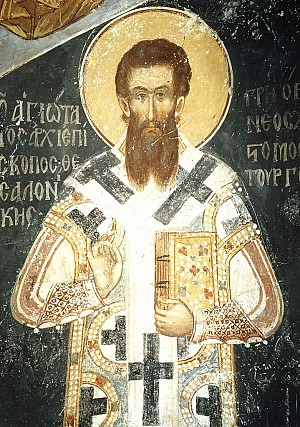 The Significance of St Gregory Palamas for Orthodoxy

by Metropolitan Hierotheos Vlachos of Nafpaktos

We can see quite clearly the great significance of his teaching for Orthodoxy on the important question of epistemology. When we say epistemology we mean the knowledge of God and, to be precise, we mean the way which we pursue in order to attain knowledge of God. The situation in St. Gregory's time was that Orthodoxy was being debased; it was becoming worldly and being changed into either pantheism or agnosticism. Pantheism believed and taught that God in his essence was to be found in all nature, and so when we look at nature we can acquire knowledge of God. Agnosticism believed and taught that it was utterly impossible for us to know God, just because He is God and man is limited, and therefore man was completely incapable of attaining a real knowledge of God.

In the face of this great danger St. Gregory Palamas developed the fundamental teaching of the Church concerning the great mystery of the indivisible distinction between the essence and energy of God. We must underline that this is not the teaching of St. Gregory Palamas alone, but of the Orthodox Church, and therefore this theology cannot be called Palamism. Many fathers have referred to the distinction between essence and energy. We find it in the Bible, in the first Apostolic Fathers, in the Cappadocian Fathers, and especially in Basil the Great and that great dogmatic theologian of the Church, St. John of Damascus. St. Gregory Palamas, with his outstanding theological ability, developed further this already existing teaching and put forward its practical consequences and dimensions.

All spiritual life is a result and fruit of the energy of the Holy Spirit. Therefore, the saint taught, we cannot participate in God's essence, but we can know and participate in His energies. As the great dogmatic theologian St. John of Damascus teaches, we can see His three unions: union in essence, of the Persons of the Holy Trinity; union in substance, in the Person of Christ between the divine and human natures; and union in energy, between God and man.

In this way St. Gregory preserves the true teaching of the Church. If in the time of Athanasios the Great, men doubted the divinity of Christ, in St. Gregory's time they had doubts about God's energies. They said that His energies are created. Therefore in the dismissal hymn of the saint we sing: "Illuminator of Orthodoxy, supporter and teacher of the Church, spiritual beauty of the monastics, irrefutable champion of the theologians...".

The common mind of the Church recognises St. Gregory Palamas, the Hagiorite saint, as a great Father of the Church, an Ecumenical teacher, and includes him with the Three Hierarchs and the three great theologians of the Church. The characterization of theologian which has been given to him, has made him an elect member of the company of the Holy Fathers. St. Gregory is truly "an invincible champion of the theologians".

But also synodically the Church has characterised him as an unerring father, teacher and theologian. The Synodal Tome of 1347 refers to this great Hagiorite saint, saying:

"But also if anyone else at all is ever caught either thinking or saying or writing against the said most worthy priestmonk Gregory Palamas and the monks with him, or rather against the holy theologians and this Church, we both vote against him for these things and put him under this condemnation, whether he be of the hierarchy or the laity. We have many times proclaimed most worthy this respected priestmonk Gregory Palamas and the monks agreeing with him. They neither write nor think anything that differs from the divine words, having examined them and understood them exactly. And they champion the divine words, or rather our common devotion and tradition in all ways, as is proper, defending them as in every respect higher than what not only they but also the Church of God and the former synodal volume regard as sophistries. And we also declare them to be very safe defenders of the Church and its faith, and its champions and helpers."

This synodal text highlights the three following truths which all Christians should recognise.

First, St. Gregory Palamas is characterised as a simple and safe teacher of the Church.

Second, the teaching of St. Gregory about the distinction of essence and energy, about man’s participation in the uncreated energy of God and about the hesychastic way of life is a teaching of the Church and a canon of godliness and life.

Third, anyone who denies and undervalues St. Gregory Palamas, as well as the hesychastic life which he lived and taught, is excommunicated from the Orthodox Church.

Rejection of the Holy Mountain and the hesychastic tradition is in reality a denial of the Orthodox Tradition and a departure from the "One, Holy, Catholic and Apostolic Church". 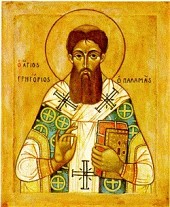