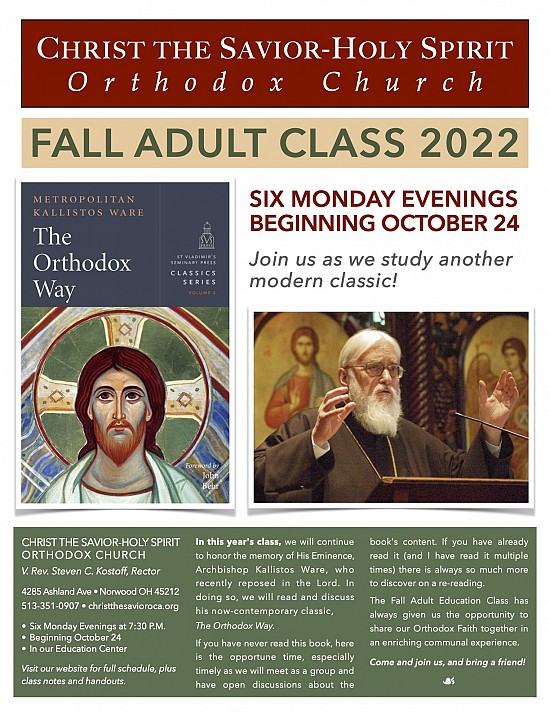 Join us as we study another modern classic!

In this year's class, we will continue to honor the memory of His Eminence, Archbishop Kallistos Ware, who recently reposed in the Lord. In doing so, we will read and discuss his now-contemporary classic The Orthodox Way.

A new edition of this book has been published fairly recently, and you can access it at SVS Press, or at Amazon, in both print and digital formats. You may have an earlier version. The problem with using such a version, is that the pagination will be different from the new version. But that is your decision, of course. The new version also has a short, but excellent Preface by the imminent theologian, Fr. John Behr.

We traditionally meet for this class for six Monday evenings. We will continue in that tradition, but because of the liturgical calendar, we will not be able to meet for six consecutive Mondays, but will have to "skip" over a Monday or two before we get to six sessions. That being the case, we will begin this Fall's class on Monday evening, October 24. The book conveniently has six chapters, together with a Prologue and Epilogue. We will combine the Prologue and Chapter One for our opening session.

If you have never read this classic, here is the opportune time, especially timely as we will meet as a group and have open discussions about the book's content. If you have already read it (and I have read it multiple times) there is always so much more to discover on a re-reading. The Fall Adult Education Class has always given us the opportunity to share our Orthodox Faith together in an enriching communal experience.

Check back for class schedule updates.

Class notes and any handouts will be posted below. 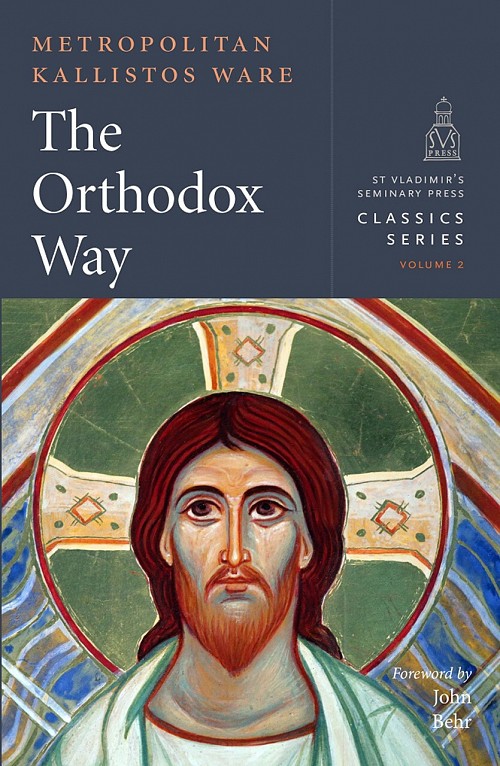 Our Fall Adult Education Class will begin on Monday, October 24 at 7:00pm. We will first serve daily Vespers and then go down to the Education Center for our first session. See above for links to order the book.

For this first Monday evening, we will read The Preface, by Fr. John Behr; and the Prologue and Ch. 1 of the book, "God as Mystery." In preparation for the class, here are a few questions or points of discussion that will hopefully enhance our class together:

After our Session I next Monday, we will not meet again until November 7. 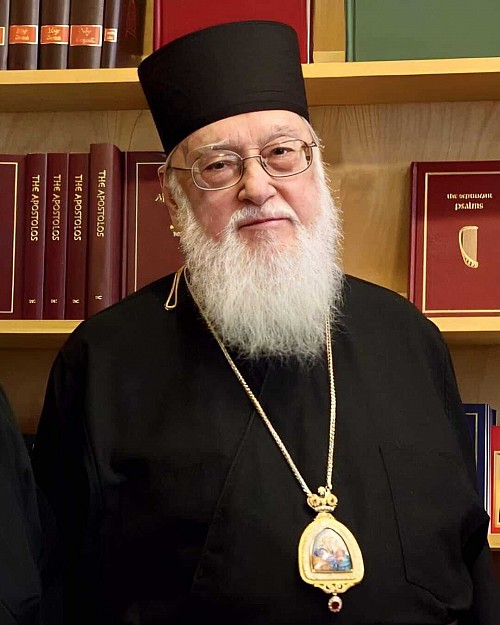 Holy God, Holy Mighty, Holy Immortal, have mercy on us!

We will resume our class next Monday, November 7, at 7:30 p.m. Perhaps we will meet in the church hall to better accommodate the huge throng from our initial session that we hope will appear yet again!

Here are some questions and/or points of discussion for the especially rich ch. 2, "God as Trinity."

+ Recently, someone wrote to me and said (after reading Ch. 2): "I read the chapter on the Trinity yesterday and have a totally new understanding. When St John writes in his first epistle that God is love, he can say that precisely because God is Trinity." Let's unpack that statement as a group. (p. 39-42)

+ How can we speak of God as "Three Persons in One Essence?" What is the terminology that makes that possible? How do we avoid tritheism? (p. 42-45)

+ What does Metropolitan Kallistos have to say about the "male symbolism" vs. "femaie symbolism" in describing the Persons of the Trinity? (p.48-49)

+ What does it mean to call the Son and Holy Spiirit "the two hands of God?"

+ And how do we avoid reducing the Trinity to an abstract concept that does not impact our lives?

+ As in our first session, be prepared to share the appended texts at the end of the chapter that particularly caught your attention. (p.56-59)

Please join us in person or on zoom. If that is not possible, you can still read along. It is a marvelous book!

I will send out a zoom link in Monday morning's "In the Life of the Parish." 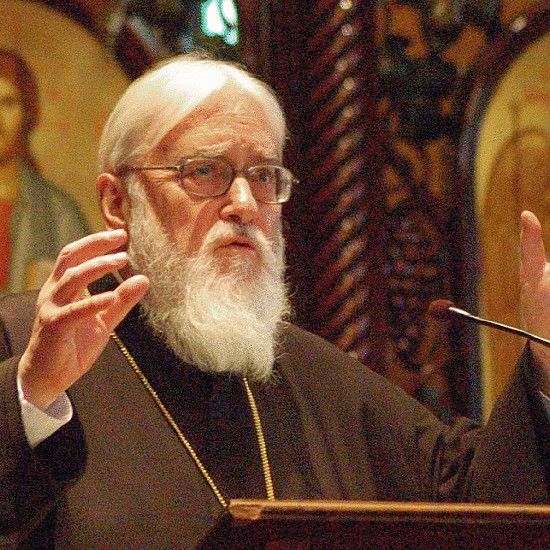 We will gather for Session III of our Fall Adult Education Class next Monday evening, November 14, at 7:30 p.m. in the church hall. The response to this year's class has been remarkable, and I hope we continue that trend! You will be able to join us "in person" or via a zoom link.

We will read and discuss Ch. 3 of The Orthodox Way by Metropolitan Kallistos Ware (+2022), "God as Creator." Here are some questions and points of discussion that will hopefully lead us into further lively discussion:

+ What is the meaning of the phrase creation ex nihilism (Gk. ex ouk onton)? What does it imply about God's "purpose" or "reason" for creating all that He did?

+ What is the "Bridge of Diamond" that Met. Kallistos references from Met. Philaret? (p. 64)?

+ Since Christianity is non-dualistic, what does that imply about the very real presence of evil? (p. 66-67)

+ What is the tripartite structure of the human person? How does this relate to our biological being? (p. 67-69)

+ How are we, as human beings, both "microcosm" and "mediator?" What kind of responsibilities does that entail for us in the life of the world around us? (p.69-71)

+ Again, be prepared to share the texts at the end of the chapter that most intrigued you.

Metropolitan Kallistos does not directly address the very contemporary issue of religion and science as it related to creation. I therefore am adding these reflections of his in the form of a Q & A dialogue from a different source: Religion, Science & Technology - An Eastern Christian Perspective.

Science as I understand it, is the attempt systematically to examine reality, So, in that way you can have many different kinds of science. Physical science is involved in studying the physical structure of the universe. Human science is examining human beings. Thus the aim of science, as I understand it, is truth. Indeed, the Latin term scientia means knowledge. So, then, science is an attempt through the use of our reasoning brain to understand the world in which we live, and the world that exists within us. Technology, as I interpret it, means applying science in practical ways, producing particular kinds of machines or gadgets that people can use. So science provides the basis for technology.

2. What does religion have to say on matters of science and technology?

I would not call religion a science, though some people do, because religion relies not simply on the use of our reasoning brain, but it depends also on God’s revelation. So religion is based usually on a sacred book of some kind. If you are a Christian that means the Bible, the Old and New Testaments. If you are a Muslim, then the Old Testament and the Quran. So science as such does not appeal to any outside revelation, it is an examination of the empirical facts before us. But in the case of religion, we do not rely solely on our reasoning brain but on what God has revealed to us, through Scripture and in the case of an Orthodox Christian, through Scripture and Tradition. Technology, is something we would wish to judge in the light of our religious beliefs. Not all of the things that are possible for us to do applying our scientific knowledge are necessarily good. Technology by itself cannot supply us with the ethical standards that we wish to apply. So then religion is something by which we assert the value or otherwise of technology.

3. Could we go insofar as saying that science and religion could be in conflict? Or at least is there a point where they might become incompatible one with the other?

I do not believe that there is a fundamental conflict between religion and science. God has given us a reasoning brain, he has given us faculties by which we can collect and organize evidence. Therefore, fundamentally all truth is from God. But there might be particular ways of using science which on religious grounds we would think wrong. So there is not a fundamental conflict, but perhaps in practice a certain clash. Problems can arise when, from the point of view of religion, we try to answer questions which are not strictly scientific. It can arise when scientists go beyond the examination of evidence and form value judgments which perhaps could conflict with religion. I would see conflict arising, not so much from science as such in the pursuit of truth, but from scientism, by which I mean the view that methods of scientific enquiry necessarily answer all the questions that we may wish to raise. There may be areas where science cannot give us the answers. For example, do we survive death? Is there a future life? That is to me a religious question. And I do not think that our faith in a future life can be proven from science, nor do I think it can be disproved by science. Equally, if we say God created the world, we are making a religious statement that in my view cannot be proved or disproved by science. So religion and science are both pursuing truth but on different levels and by different methods. 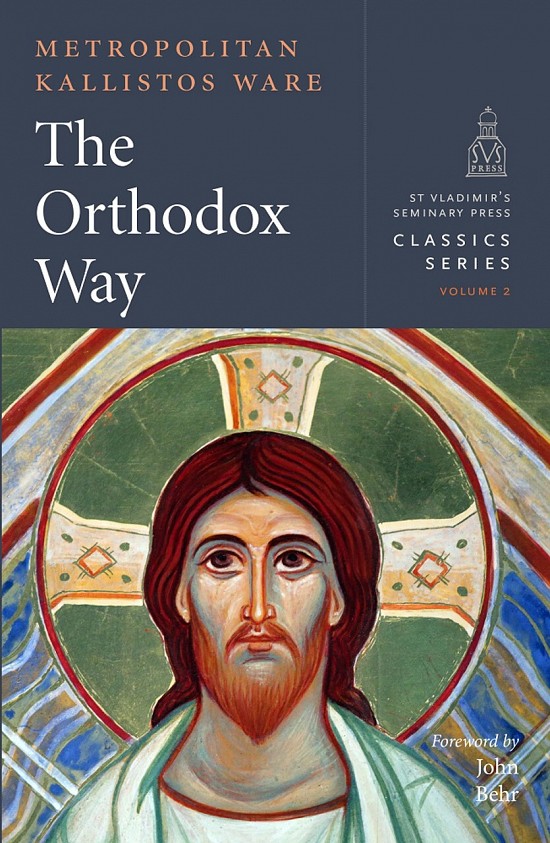 Questions and Discussion Topics for Session IV of our Fall Adult Education class on Monday, November 21, at 7:30 p.m.

Christ is the “Alpha and Omega” of history and of the life of the Church – as well as the very center of the Church’s being, since Christ is the Head of the Body. We will explore these wondeful themes at our next session of our Fall Adult Education Class next Monday evening.

We will spend about ten – fifteen minutes on the closing sections of Ch. 3, “God as Creator.” Please go over the questions that were prepared for that session that have not been covered as of yet. I would like to focus on the “Consequences of the Fall.”

For Ch. 4, here are some questions and topics for further discussion:

+ “You are not alone; you have a companion.” So writes Metropolitan Kallistos. Something to talk about. (p. 95-97)

+ What is the strength and full extent of the Jesus Prayer? How does this prayer combine adoration and penitence? (p. 97-100)

+ What are the three reasons that Metropolitan Kallistos raises for defending the “Virgin Birth” of Christ? (p. 107-110)

+ As always, be ready to point to the appended text or two that really resonated for you. 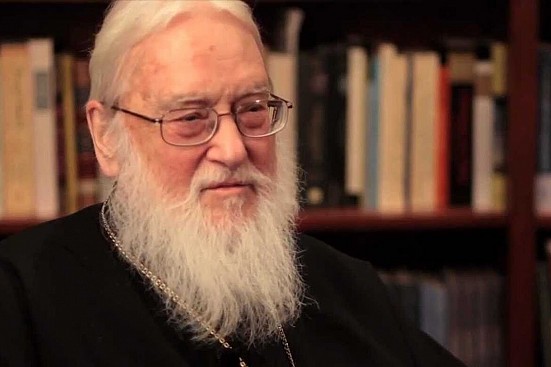 We were not able to conclude our discussion of Ch. 4, “God as Man,” last Monday evening. We will therefore turn to the latter sections of that chapter next Monday evening, focusing on “Obedient Unto Death,” “Death as Victory,” and “Christ is Risen.” Please look back at the discussion points and questions sent out for that chapter.

We will then turn to ch. 5, “God as Spirit.” As the major focus of Session V. Here are some questions and talking points for that chapter:

+ Metropolitan Kallistos begins the chapter with an intriguing question: “Clenched Fists or Open Hands?” What is he getting at with these images? How would you characterize your most common placement of your own hands, not limited to the literal plane of daily activity (p. 125-126)

+ What or Who exactly is the Holy Spirit? How would you explain this to an inquirer? How do the images of wind and fire reveal a good deal of the activity of the Holy Spirit? Where do we find these images in the Scriptures? (p. 126-129)

+ What are the three points to learn from the Pentecostal Gift? Do these points seem obvious or openly true in your experience of the Church? (p. 132-133)

+ What can we learn about eldership and foolishness for Christ from the section of that name? How can we discern the real from the false when examining both of these charisms? (p. 133-139)

+ Be prepared to share those passages at the end of the chapter that most resonated for you.